Evolution of asexual complexes in the sunflower family

I have been interested in agamic complexes since I was a graduate student studying the North American Crepis agamic complex.  This complex was one of the first thoroughly described examples of a group in which polyploidy, hybridization and asexual reproduction via seeds (apomixis) come together to produce a tangled array of populations and species. As a beginning graduate student, I was drawn to the opportunity that these systems provided to ask questions about the origins and maintenance of diversity.  I am still intrigued by these groups, which combine traits that are often considered challenges to our ideas about biological species – lineages may be of hybrid origin, they can double their genomes and gain strong reproductive isolation in one big jump, and then they can reproduce asexually and freeze the variation that they originated with.  How strange!

We study two agamic complexes: North American Crepis and Townsendia.  Each possesses some shared and some unique characteristics that allow us to undertake complementary studies of specific processes and questions.

Townsendia is a Rocky Mountain genus of roughly 30 taxa in the tribe Astereae. The 1957 monograph of the genus by John Beaman described the group’s diversity, characterizing ploidy and breeding system variation and laying a strong foundation for further studies. The genus is very charming (cutest plants ever!), including a number of diminutive forms that are easily overlooked both because they are small and also because some flower in early spring. Two features of the complex are of special interest to our research. First, Townsendia includes roughly 13 species with both diploid sexual and polyploidy asexual populations. In each case, the apomictic polyploids have a broader and more northerly distribution than their sexual counterparts, a pattern known as geographical parthenogenesis.

Townsendia hookeri includes sexual diploid and asexual polyploid populations. This species ranges from the foothills of Colorado, northward to Jasper NP in Alberta. Disjunct northern populations also occur in Yukon and Alaska. We have characterized ploidy and reproductive mode across the range using studies of pollen size and viability, and DNA content (using flow cytometry). Our results indicate that polyploid asexuals occupy previously glaciated regions, while sexual diploids are restricted to unglaciated regions of Colorado and adjacent Wyoming, or the Yukon.

Former Ph. D. student Stacey Thompson showed that polyploids originated at least four times in this system. and also characterized ploidy levels and reproductive mode in a large number of populations, from Colorado to Yukon (Thompson and Whitton 2006). Stacey and Gina Choe, then an undergrad in the lab, also characterized breeding patterns and patterns of diversity in Yukon populations, which include sexuality and apomixis (Thompson et al. 2008).

A key focus of ongoing research on T. hookeri is to understand what governs the distribution of sexuals and apomicts. Are apomicts successful in previously glaciated areas because they are better colonizers (it only takes one seed to establish an asexual population)? Do diploids and polyploids differ in ecological tolerances? Do the reproductive interactions between sexual and asexual types limit their ability to co-occur? Whatever we learn from T. hookeri serve as a point of comparison for other species in the genus. If we find that the distributions of multiple sexual/ asexual groups are governed by the same factors, this will suggest that these factors are generally important.

In turn, this leads to predictions about the fitness of apomicts when transplanted into the range of sexuals: they should do poorly, because if they were able to persist, they should be able to eliminate the sexuals. Ph. D. student Evan Hersh is exploring this area, setting up transplant gardens in the species’ native range to directly test for differences in survival or reproduction of sexuals and asexuals in the field.

Because we still know so little about the lifecycle and patterns of birth, reproduction and death in this species, Adam Wilkinson set up demography plots to allow us to estimate life history parameters.  One thing we have learned so far is that just because a plant looks dead one year doesn’t mean it won’t come back to life the next.  Maybe that’s why they’re called Easter Daisies!

The situation in this second agamic complex is probably even more complicated than that in Townsendia, for two reasons: First, the polyploids of Townsendia are triploid or tetraploid, while those in Crepis can go higher, perhaps to decaploids (with 10 sets of chromosomes). Second, many of the polyploids in Crepis look like hybrids, combining features of at least two diploids. The existence of so many hybrid types, propagated by asexual reproduction, has produced a bewildering array of morphological types in nature.

As with Townsendia, we are using previous studies to help inform our approach. E.B. Babcock and G. L. Stebbins first documented patterns of variation in this complex, in their 1938 monograph. While that work was often cited, this group of plants was largely untouched until the early 1990s. I studied the group as part of my Ph. D. thesis, despite being warned against it by G. L. Stebbins himself, in his response to a letter I wrote asking for suggestions (interestingly, one of the groups he thought would be more promising was Townsendia – it only took me 10 years to heed his advice). In most ways, his concerns were well founded. While I learned that the group was at least as challenging as Stebbins and Babcock had thought, the tools available at the time of my Ph. D. limited sampling depth, and did not provide any shortcuts for estimating ploidy. So parts of my thesis sat on a shelf, but did not gather dust. We tackled a few focused questions, for example in a 2008 paper examining the relationships and breeding patterns of two sets of populations (Whitton et al. 2008), but the big breakthroughs in our understanding has come from the work of recent Ph. D. Chris Sears. Chris was able to sample many populations (more than 100) and characterize ploidy for more than 600 samples using flow cytometry, a technique that estimates DNA content of cells. This allowed him to examine complex relationships knowing the ploidy of each individual under study. For a group in which ploidy variation is well known, this is an essential step in understanding the role that ploidy and breeding system shifts have played in these groups.

Chris started with a plastid phylogeny of diploids only, which showed remarkably clear results and firmly resolved relationships among the seven species in the group. He then layered on the polyploids, and was able to show the broad patterns of origins of polyploids. In addition, we are using the data on distribution of DNA cytotypes to test ideas about factors that limit coexistence of sexual and asexuals.

Fewer than 1% of plant species are apomictic, but nonetheless, what we learn studying these systems has potential relevance for the other 99% of species. One interesting observation is that Crepis populations very often include more than one species. For the cases that we understand well, it seem that these species can coexist in part because they are asexual – they do not appear to share gene flow, and thus distinct types can be maintained in one place. This suggests that it is interference through breeding, and not ecological interactions (such as competition) that limit coexistence.

In addition, while apomixis is relatively uncommon, polyploidy is a pervasive feature of flowering plants. Studying asexual polyploids can provide broader insights into the role of multiple polyploid origins on patterns of diversification.

Studies of Plant Diversity and Distribution
​
My involvement with the UBC Herbarium as director since 2006, and my general interest in biological diversity have lead to some additional opportunities.  In particular, the herbarium is a magnet for students interested in the flora of BC and surrounding regions, and part of my research effort is dedicated to supporting the training of students who will focus on documenting and understanding regional diversity.

M. Sc. Jamie Leathem (2014) studied community structure and plant invasion in roadside habitats along the Dempster Highway in Yukon. While more southern regions have a relatively long history of plant invasions, the spread of invasive species in Yukon is more recent. Jamie documented this phenomenon and looked at traits that correlate with high local densities. Identification of such traits may aid in predicting invasions and managing or mitigating the spread of invasive species.

Research on Species at Risk

Former M. Sc. student Linda Jennings (Lipsen) studied conservation genetics of two rare and closely related townsendias in Utah.  A key motivation for the work was the fact that taxonomists differ in whether these two should be recognized as distinct, and one of the species, T. aprica, is listed as threatened under the U.S. Endangered Species Act.  We used Linda’s genetic data together with ecological niche modeling, to suggest that T. aprica should be maintained as distinct from T. joensii var. lutea (Lispen, Lee and Whitton 2013).

I am fortunate to have been able to conduct field work in some pretty special areas, beginning with the Gaspé Peninsula of Quebec and southwestern Newfoundland as an undergraduate student, and including much of the Rocky Mountains north of Mexico.  These experiences, added to the time I spent camping as a kid with my family, have given me a reverence for the natural world.  As an academic scientist, with so much freedom to work on questions that spark my imagination, I also feel a responsibility to contribute my expertise when I can.  One manifestation of this is my involvement with Canada’s Species at Risk Act (SARA) and COSEWIC (the Committee on the Status of Endangered Wildlife in Canada).

I was a member of COSEWIC from 2007-2014, and then a member of the Vascular Plant Specialist Subcommittee until 2018. This led to an interest in understanding how SARA is working.  I was part of a working group (led by Arne Mooers at SFU) that examined SARA’s performance (Mooers et al. 2010), and documented and described SARA’s achievements from 2003-2009.

In 2011, I gathered a fabulous group of students, postdocs and other UBC and SFU researchers to conduct an analysis of Recovery Strategies under SARA.  A first paper from this work was published in 2013 (McCune et al. 2013), and a second paper is in progress (Harrower et al.) You can see a talk on these results here.

Working in collaboration with City of Boulder Open Space, we are fortunate enough to have two garden sites just North of town. The first is near the Foothills Trail Head off Broadway Blvd.  Our second garden site is to the East, near the Boulder reservoir.  These gardens represent the diploid center of our T. hookeri populations.

We are grateful to be able to have two gardens on the ranch of Professor Dan Tinker of the University of Wyoming. These gardens are in the overlap range of T. hookeri, where diploid and polyploid populations both broadly co-occur, though not within the same sites. (photo not Dr. Tinker's ranch, but close) 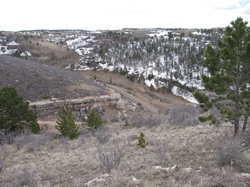 Working with the Bureau of Land Management- Rawlins office, we are able to install two gardens in the Roger Canyon area of the Medicine Bow mountains. These gardens are in the overlap range of T. hookeri, where diploid and polyploid populations both broadly co-occur, though not within the same sites. 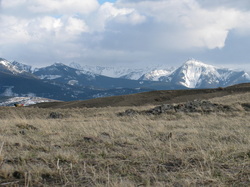 Our northern gardens are on the Blake Family Ranch and Nursery just north of Big Timber, MT.  These gardens represent the polyploid range center for our plants. The Blake family has been ranching in the area for 40 years and has a deep appreciation for native plants. 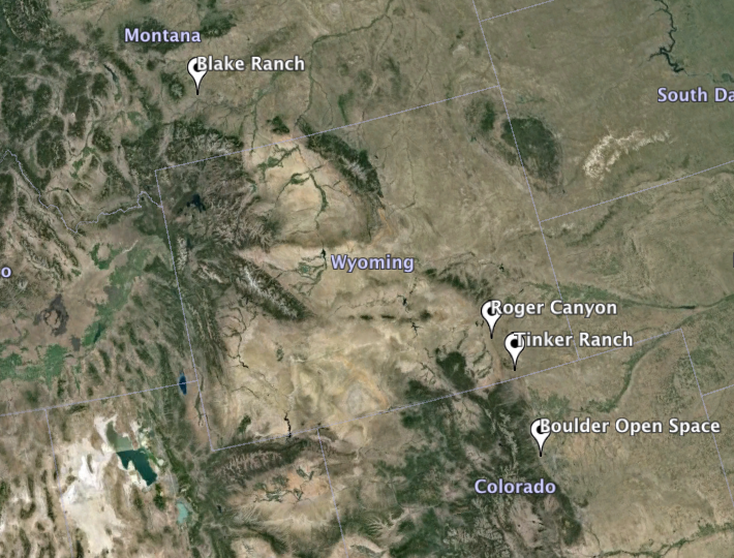